Our Saturday started with a ride down to the metro station at Los Dominicos and the park there had a little open air market of vegetables. Giant celery and zucchini, great mounds of artichokes
It was all so beautiful but as for the prices ...
between kilos and pesos I had a hard time figuring it all out! 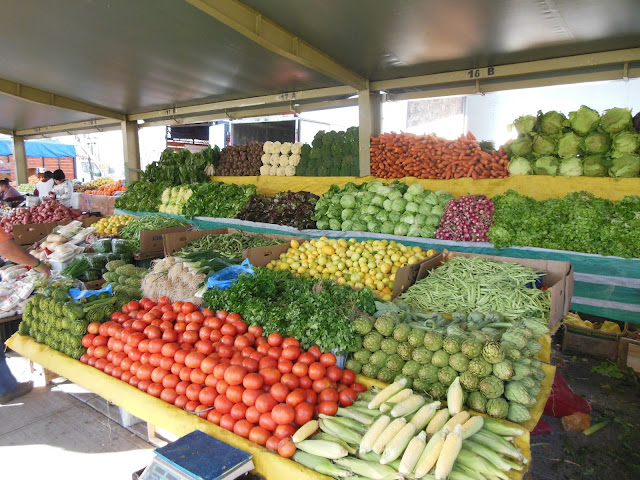 We got out of the metro at the Plaza de Armas which is the heart of Santiago - the place where it all started in 1541 with explorer Pedro de Valdivia. It has an open area for marching troops (in the past) and the government buildings and cathedral ring the square. 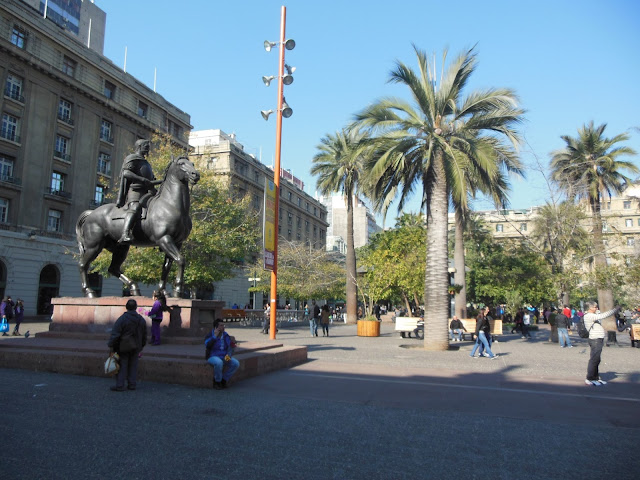 We went to Iglesia de Santo Domingo  which was built from 1774 to 1808. We made it in time for Mass. The Virgin of Pompeii is above and behind the altar. 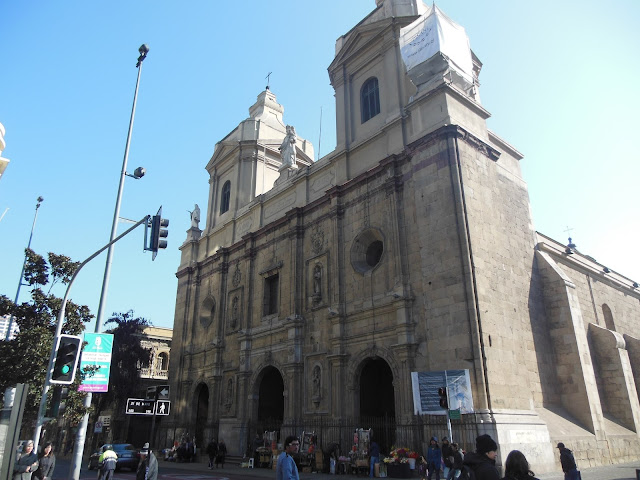 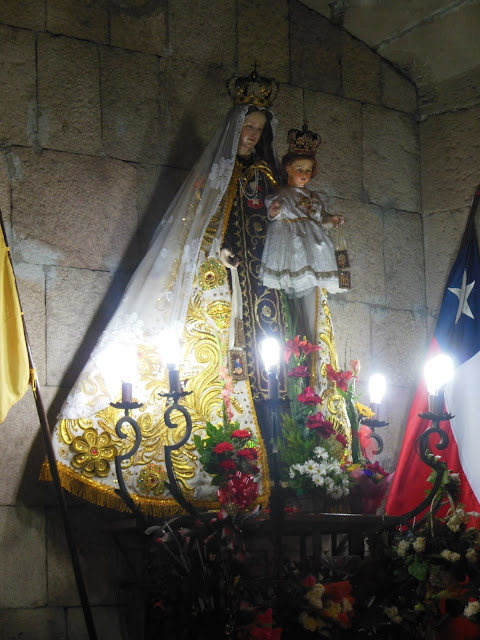 On the Plaza is the original Chilean Supreme Court building which is now a museum. 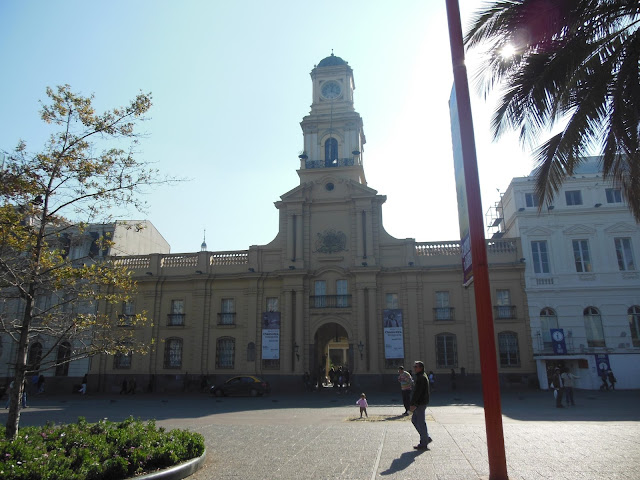 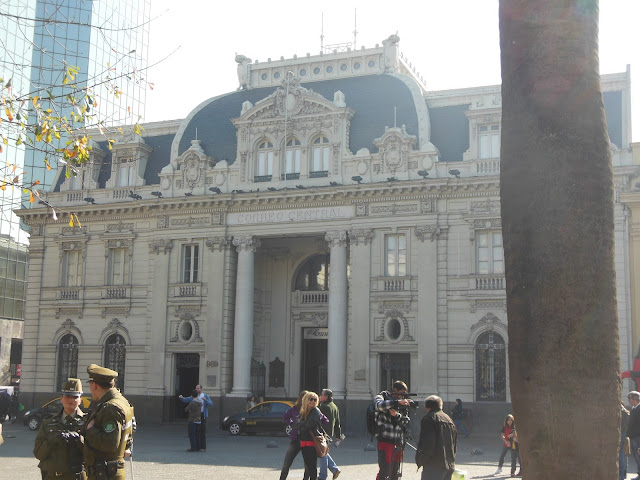 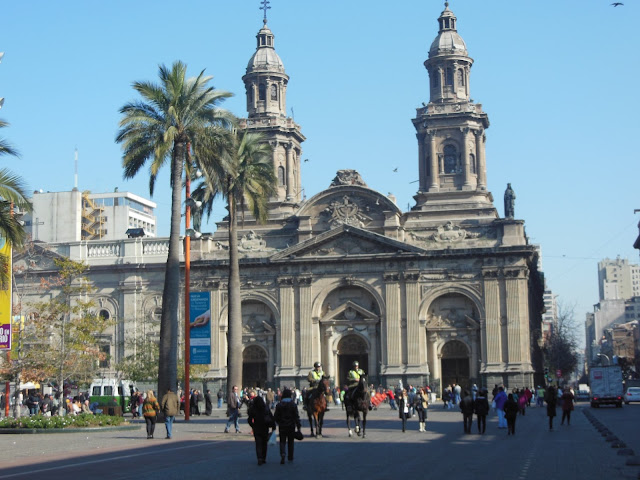 Inaugurated in 1775. This is the fifth church to be built on this site and you can probably guess what happened to the last four! yes, earthquakes. The interior is 295 ft long.
We happened to show up during a Mass for Marriage Encounter - the place was packed. We ran into the procession of priests entering for Mass followed by the Archbishop of Santiago who waved and smiled at my grumpy Thomas who wouldn't wave back! Alas it was a guitar Mass despite the fact that they have a beautiful large pipe organ imported from London in 1850.
On the left nave is the beautiful Tabernacle Chapel - just look at the ceiling 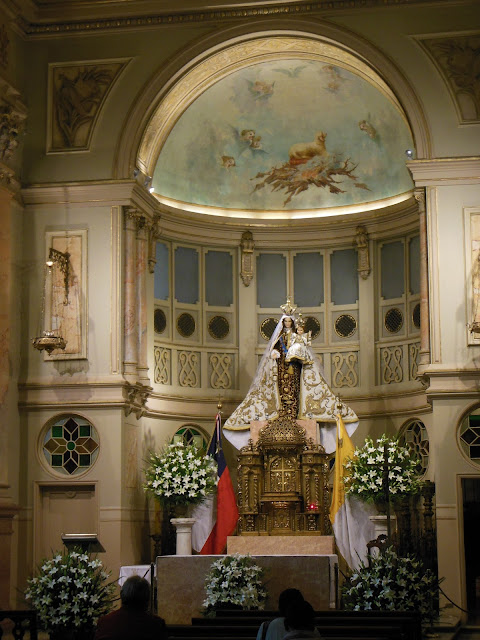 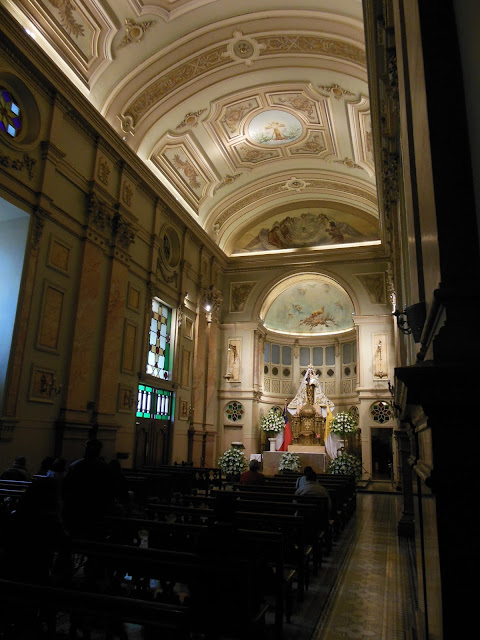 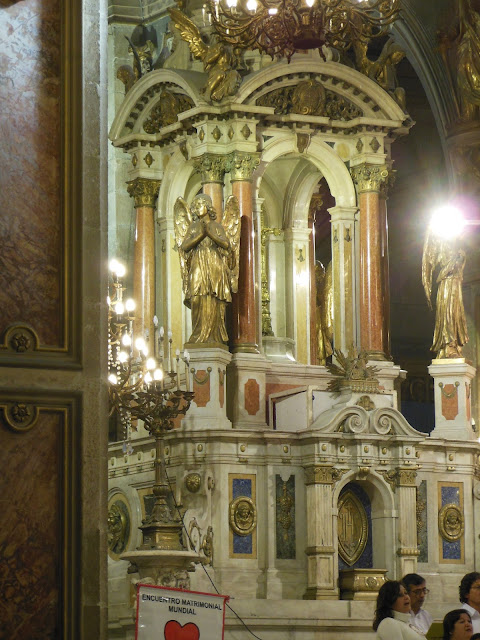 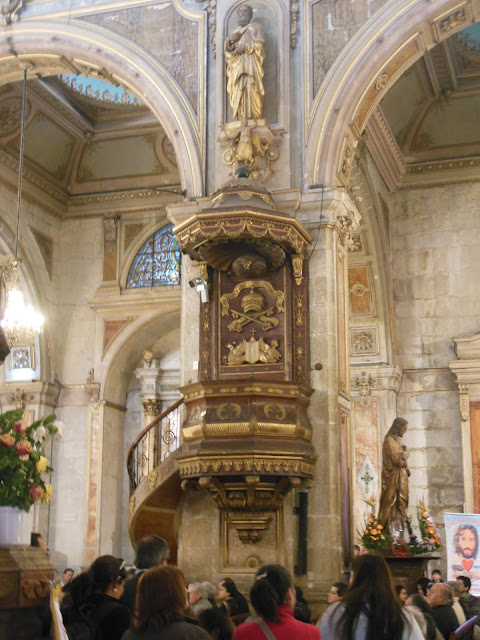 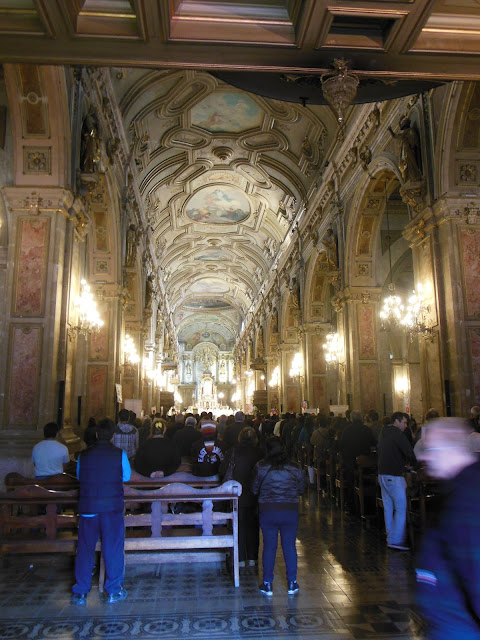 An altar to St. Teresa de los Andes along with a relic under her statue. 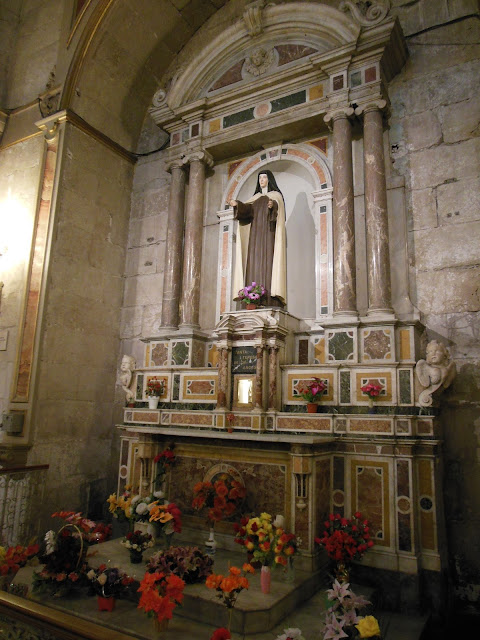 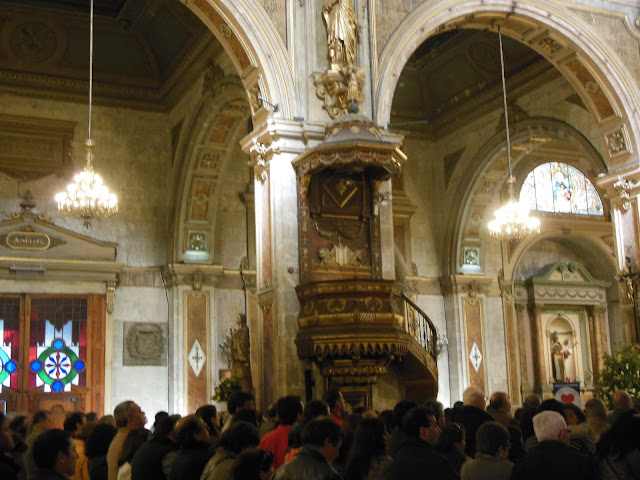 Jim got a shoe shine in the Plaza from a one-legged man for $2. 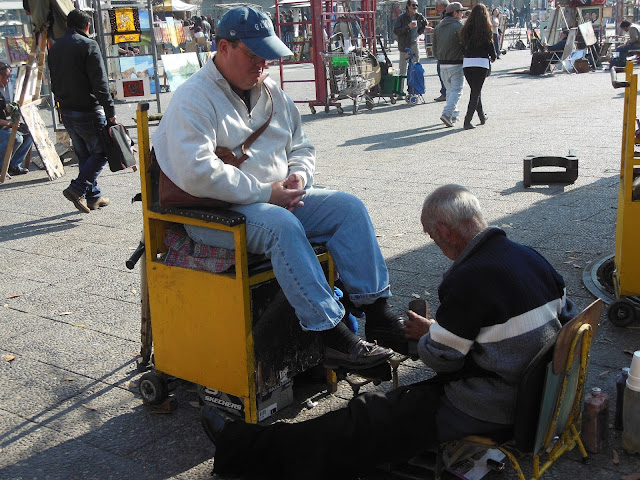 The plaza is a great social place - they have musicians, protesters (PETA), street evangelists
and other amusements along with the mounted carbineros(police) 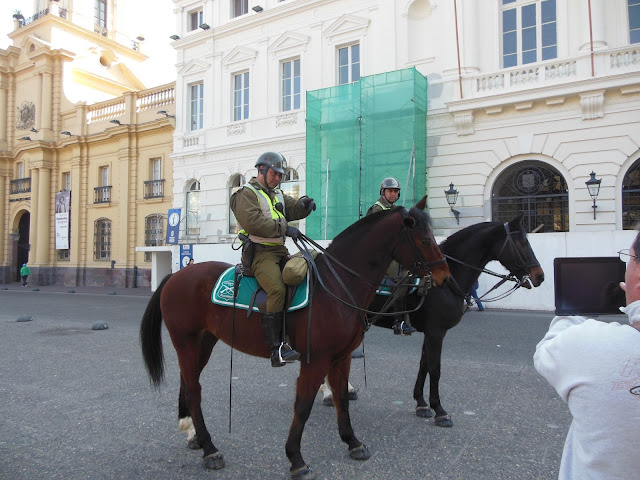 Andrew posed with some mimes. 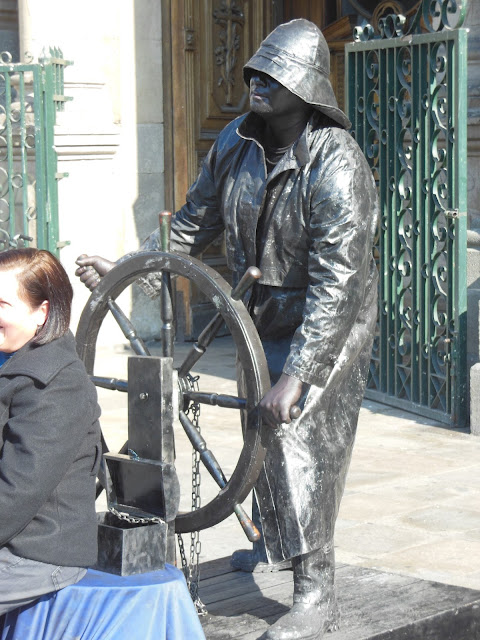 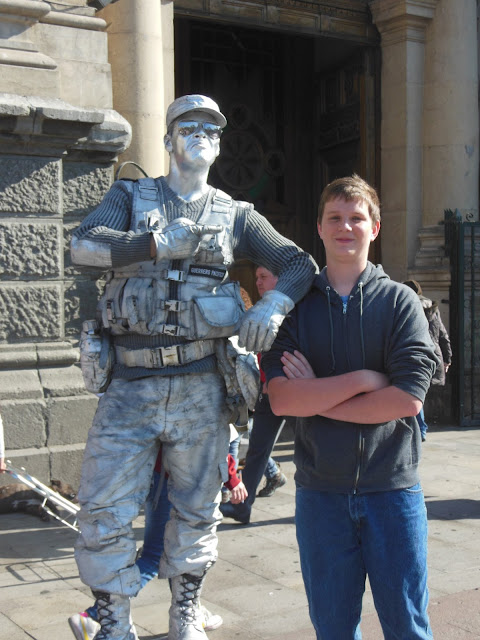 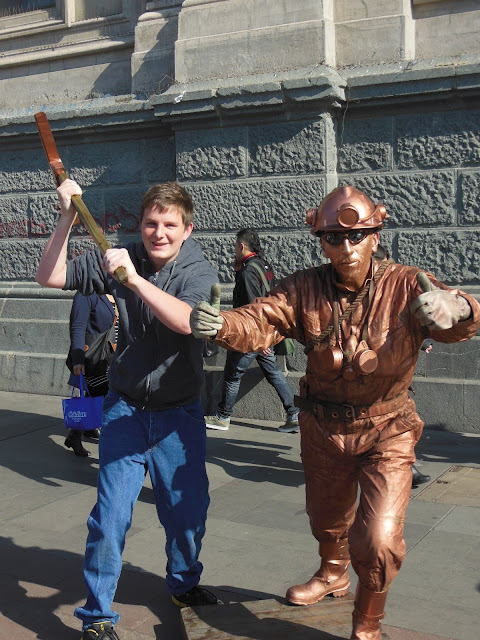 And our last stop for the day was the Mercado Central which was built in 1872 as a place for merchants to sell their wares. The section we went to was a very busy fish market with a wide variety of sea life - octopus, crabs, eel, barnacles, urchins, conchs, and other creatures I couldn't name.
The mussels in this picture were enormous! 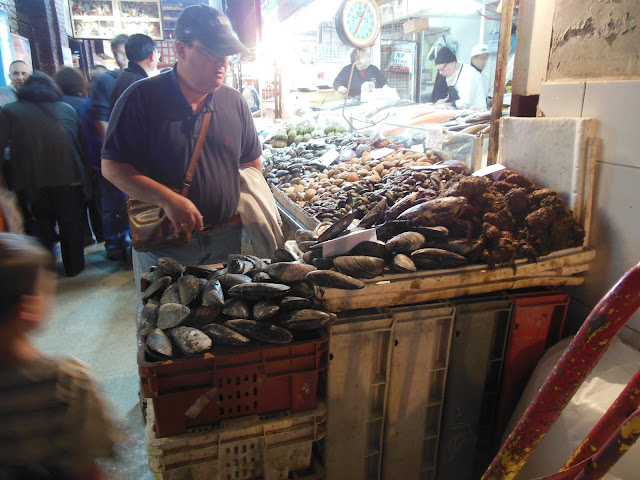 The cast metal roof was built in Glasgow and shipped to Chile in pieces. It is open to provide ventilation. The building is filled with markets and restaurants and people. We had a delicious lunch. 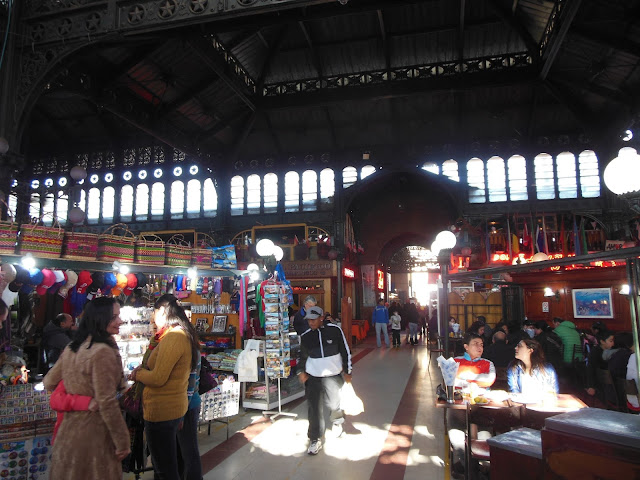 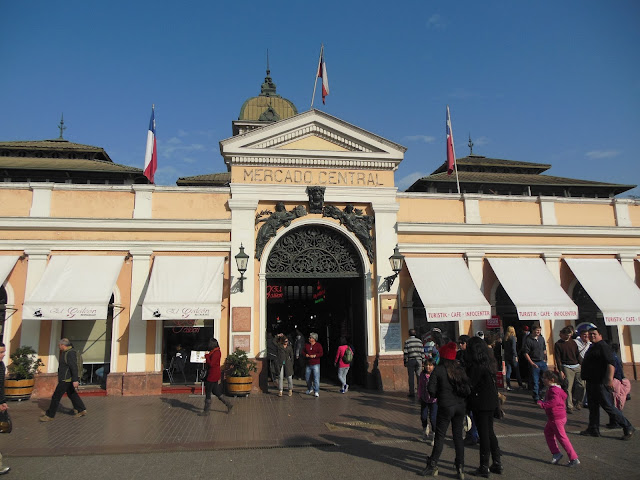 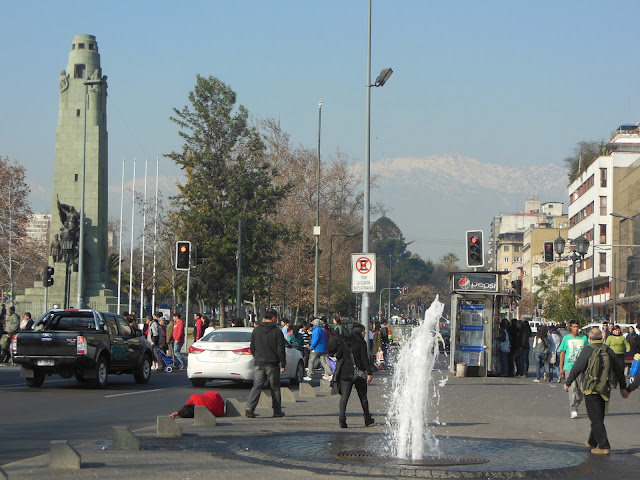 And the ever present view of the Andes.
Tomorrow we will be going to Mass at a Benedictine Monastery where the monks chant the Mass in latin and then a trip out to the countryside.